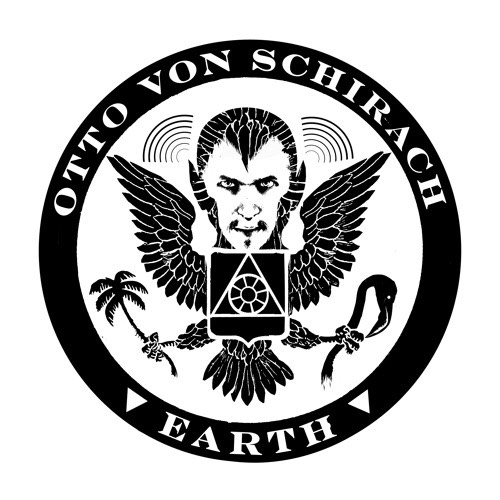 Otto Von Schirach (half Cuban / half German) was born in 1978 in the swamp infested refugee world of Little Havana Miami. As a child his grandmother practiced Santeria and White Magic, which opened his eyes to the strange and bizarre. Otto grew up listening to Miami Bass, Gore Grind, Gangsta Rap and Afro Cuban Noise. In 1995 Otto bought his first drum machine from a crack-head just 2 blocks from his mom’s house. Right away he recognized his passion for grimy diamond soaked kick drums through distorted fuzz muck.

In 1998 Otto released his first demo, which got him signed to a 4 album deal with Miami’s electronic gangsters Schematic Records. Later he released another 3 records on Beta Bodega with La Mano Fria under his alias El Santo. In 2003 Otto worked on the Skinny Puppy album “The Greater Wrong of the Right” which scored him a 57 show tour opening for them across the USA. He scared the living shit out of all the Skinny Puppy fans night after night with his 35 minute, 3 costume change, ear punishing dance party. In 2004 Miss Kitten had Otto do a Gangsta Bass Sci-Fi remix of her “Professional Distortion” track, released on Nova Mute UK. Most recently Otto finished a Sound Library for Fixed Noise and Native Instruments entitled “OTTO” which offers over 4 GB of instruments that include construction, loops, sequences, surround, random and much more.

In Early 2005 Otto sent Mike Patton (co owner of Ipecac Recordings) a 38 song CDR, Mike hand-picked and sequenced in his own mix, which is now “Maxipad Detention”. On July 25th, 2006 Otto and Ipecac will release “Maxipad Detention” an 18 song journey into gore filled Gabber Bass Drums from beyond.

After 8 albums, 10,000 shows, a 4 Gigabyte Sound Library and 7 computers, what else do you want? Otto is currently working on a bunch of new collaborations with Venetian Snares, Doormouse, Gut, Ebola, Gouch and is also in the studio working on new ideas for the next Skinny Puppy record.

Otto is a true Gang Banger. A true slave to the sound wave, he will always make love to speakers worldwide.