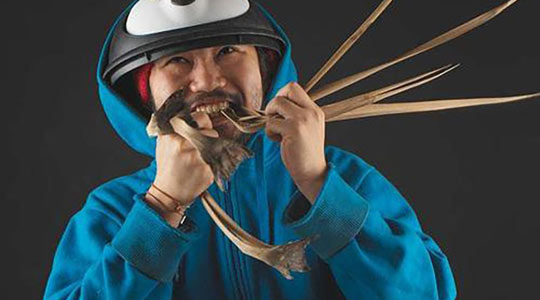 He started out in his native Japan, making improvised noise music performing under the name Shiez 2000, also contributing to a few other projects in the scene. After moving to Brighton from Tokyo, he founded Brighton’s premier breakcore/noise night, Wrong Music, with friends Henry Collins (aka Shitmat) and Matt (Roger Species). Collins took Scotch Egg under his wing, convincing him to use his Game Boy to create gabber tracks. As of 2006, he began releasing music on the Wrong Music label, Adaadat & Junior Aspirin Records, with notable collaborations with Ove-Naxx, Hrvatski, Duracell, Bong-Ra, The Pipettes and The Go! Team.

Next to his band projects Drumeyes (with Eda of Boredoms) and Devilman (with Taigen Kawabe of Bo Nigen) Shigeru produces and performs as DJ Scotch Bonnet and co-runs the Berlin-based label Small But Hard.